YONKERS, NY (June 28, 2021) – As one of the world’s great rivers, the majestic Hudson has long been attracting attention from early explorers to major industries to today’s residents who live in the growing number of residential towers that dot the Yonkers riverfront.

The Hudson is now the focus of a new and innovative marketing campaign unveiled today by Yonkers Mayor Mike Spano to celebrate the city’s remarkable riverfront renaissance where residents can live, work and play. The goal of the campaign is to rebrand the Yonkers riverfront which has emerged as a vibrant and diverse community that is attracting new residents, restaurants and shops.

The theme is Yonkers On The River with the tagline Go Anywhere From Here. The taglinehas an aspirational meaning for anyone, with endless options for career, home or play. It also refers to Yonkers unmatched accessibility with two Metro-North train lines, easy access to all major highways and parkways, only 40 minutes to every major airport in the Tri-State region and only 20 minutes to Grand Central Terminal.

“The incredible revitalization under way in our city’s riverfront community is nothing short of extraordinary. Whether you’re dining at one of our award-winning restaurants, taking in an outdoor concert, kayaking on the river or simply enjoying the spectacular views of the Palisades, the Yonkers riverfront has something for everyone. With this exciting new marketing campaign, we are letting everyone know that Yonkers On The River is the place to be,” said Mayor Spano.

The new campaign, which will run through the end of the year, is the next generation of the highly successful Generation Yonkers campaign that has positioned Yonkers as the region’s next go-to urban center. As the City of Yonkers has evolved, so has the marketing campaign over the years. Now in its eighth year, the Generation Yonkers campaign is credited with putting Yonkers on the map and contributed to the city’s tremendous growth which has seen more than $4 billion in private investment and over 9,100 multifamily units planned, completed, under construction and approved for developments.

The Yonkers On The River marketing campaign, which was developed by the Westchester-based communications and advertising agency Thompson & Bender, features an integrated media mix including social, digital, TV, outdoor and signage.

Yonkers On The River signage is being prominently displayed along the Yonkers riverfront and throughout parts of the city. The Generation Yonkers website is updated with a new domain: YonkersOnTheRiver.com which will be displayed on all advertising and signage. The website features testimonials from residents who live along the riverfront as well as businesses that are located there.

The Yonkers riverfront is drawing significant private investment by major residential developers such as RXR, Extell, Avalon, Hudson Park, Apex, Ginsburg Development, AMS Acquisitions and Confier Realty. In another big boost for the Yonkers riverfront, Lionsgate Studios is nearing completion of a $100 million TV and film studio at the iPark site. The project is expected to bring more than 400 full-time jobs to the area.

The residential boom underway along the Yonkers riverfront is being driven by the business-friendly climate created under the leadership of Mayor Spano as well as the work of the Yonkers Industrial Development Agency (IDA) which provides financial incentives to developments projects. Over the past two years, the Yonkers IDA has provided financial incentives to development projects representing a total private investment of approximately $1.1 billion. The developments are projected to create approximately 2,700 new residential units, 234,400 square feet of commercial and industrial space and approximately 3,450 in construction, permanent and part-time jobs. Ten percent of all new residential units are set aside for affordable housing.

YONKERS, NY – December 3, 2020 – The Human Rights Campaign Foundation, in partnership with the Equality Federation Institute, this week released its ninth annual Municipal Equality Index (MEI www.hrc.org/mei), the only nationwide rating system of LGBTQ inclusion in municipal law and policy, scoring the City of Yonkers with a perfect 100 for the sixth consecutive year. Yonkers was one of five cities in New York to receive a perfect score and one of 94 nationally out of 506 surveyed.

“Our administration continually works toward full equality amongst our residents and employees,” said Yonkers Mayor Mike Spano. “We are once again extremely proud to be part of the growing list of communities with a perfect score on the Municipal Equality Index. Our rating reflects diversity as Yonkers’ greatest strength and the respect we have for one another, regardless of who you love.”

Yonkers was specifically recognized for the following categories on its 2020 MEI Scorecard (https://bit.ly/33GuCyi):

Michael Sabatino, Yonkers Director of Constituent Services/Former City Council Majority Leader stated, “I am proud to know that Yonkers was one of 94 cities nationwide to score a perfect score on the Municipal Equality Index.  We can attribute this to the hard work of Mayor Spano’s administration and the Mayor’s LGBTQ advisory board.   Yonkers is truly a diverse city where our residents are respected and embraced regardless of their ethnicity, religion or their sexual orientation.  We promote a safe environment that allows everyone to co-exist and creates an atmosphere that allows all to contribute to the betterment of the City of Yonkers. Congratulations to all.”

Anthony Nicodemo Chair of  Mayor Spano’s LGBTQ Advisory Board stated “The fact that Yonkers has earned a 100% shows how the city has embraced the spirit of inclusion. Mayor Spano and the City Council has made a concerted effort to embrace and support the LGBTQ community. Yonkers is a terrific place for LGBTQ people to live work and play.”

The 2020 MEI reveals that cities across the nation are not waiting for their states to extend vital protections to the LGBTQ community, nor are they intimidated by some state elected officials threatening to deny cities the ability to extend fully-inclusive protections to their residents and workers. This year, 94 cities earned perfect scores for advancing fully-inclusive policies and practices — at a time when the nation has been seeing a record number of anti-LGBTQ measures proposed by state elected officials bent on promoting discrimination.

Tanya Gonzalez moved from the Upper West Side of Manhattan, to her rental apartment building, River Tides in Yonkers. 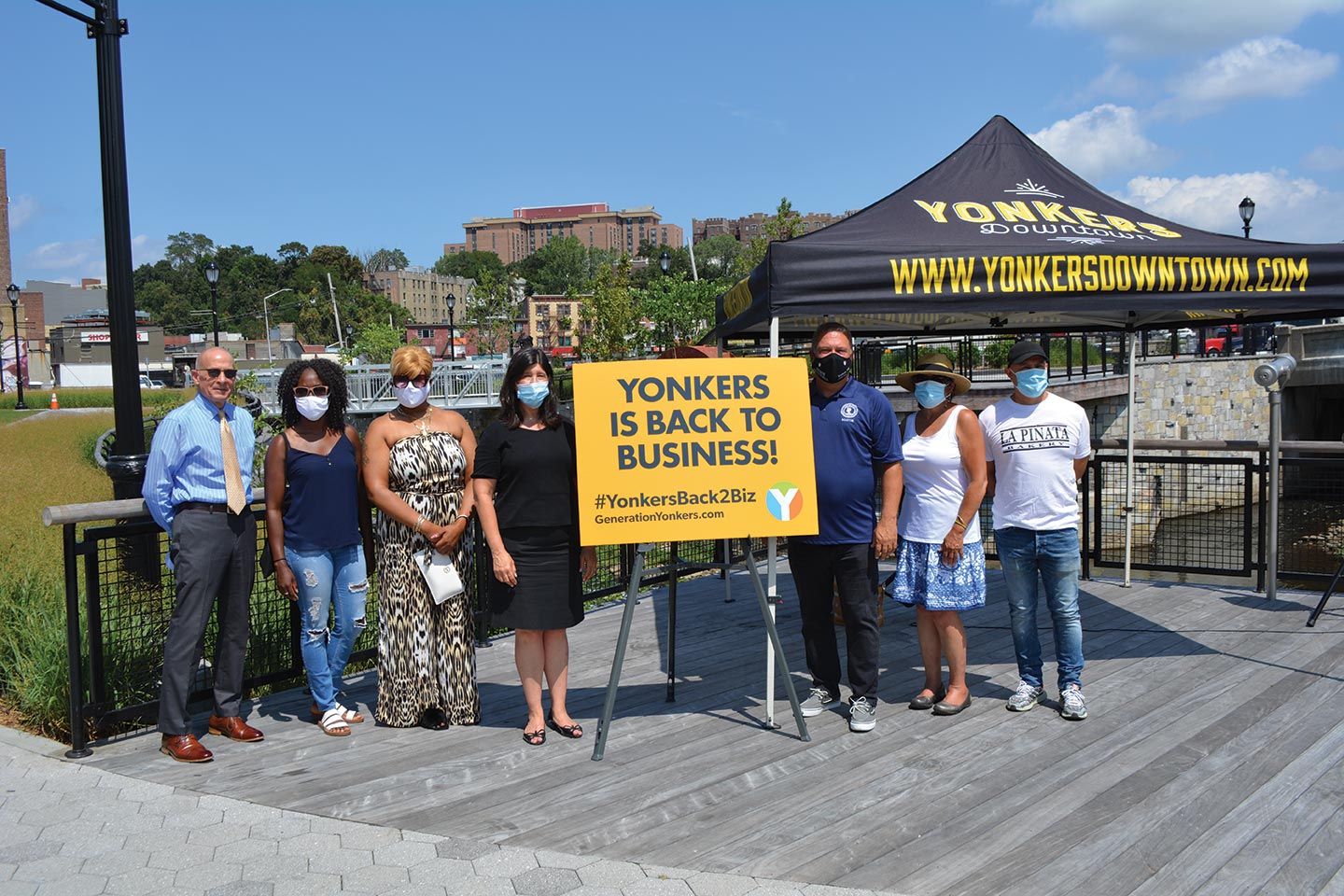 The Yonkers business community is embracing the City’s new Yonkers Is Back to Business! campaign with a series of events designed to generate excitement and spur business activity throughout the City. 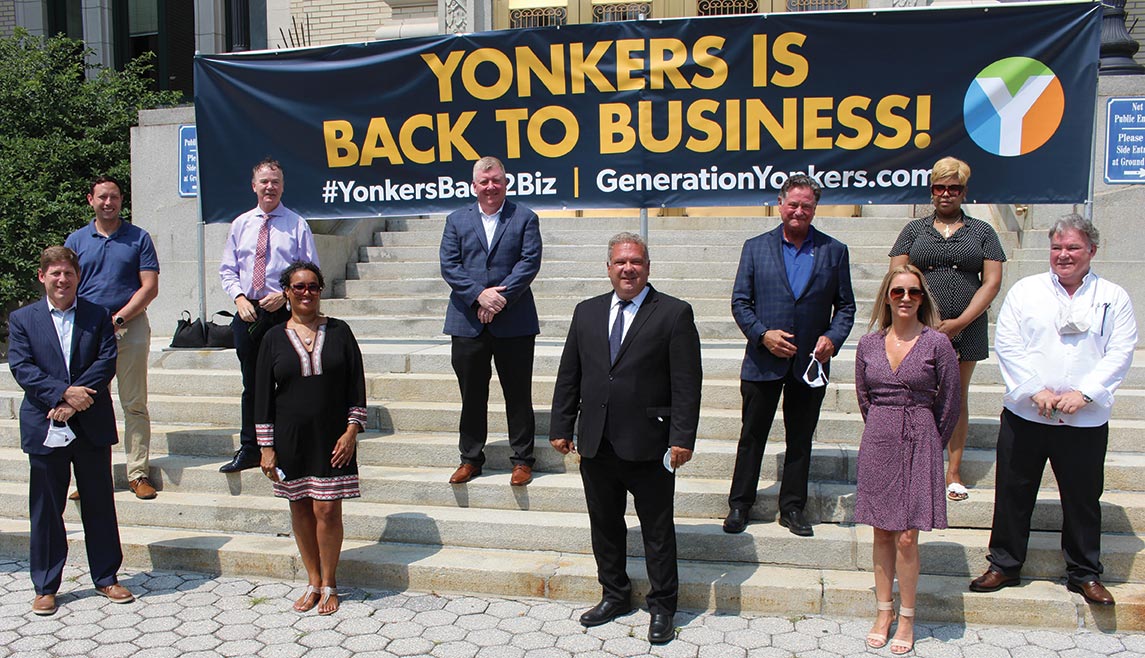 The City of Yonkers is celebrating its reemergence from the economic downturn caused by the COVID-19 pandemic with an exciting new marketing campaign featuring prominent business leaders telling why they enjoy doing business in Yonkers.

Yonkers is Back to Business

Dolphin Restaurant
Free dessert with $50 minimum purchase
*Dine in only

Zuppa Restaurant
Free dessert with $50 minimum purchase
*Dine in only

Bougie Brews
Free Brownie with any drink or food purchase

Giovanni’s Restaurant
15% off food with $20 minimum purchase
*Takeout or Dine in (must mention when ordering)
Offer valid until August 31st, 2020 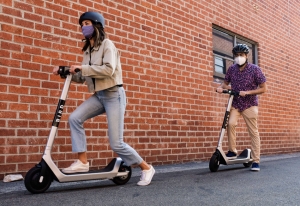 YONKERS, NY – July 31, 2020 – Yonkers Mayor Mike Spano today announced the city has partnered with Bird to launch New York State’s first-ever electric scooter pilot program. Beginning in early August, as part of a one-year pilot program, Bird will deploy up to 200 scooters in southwest Yonkers, including the Downtown-Waterfront area, with the potential of expanding up to 500 scooters to meet demand.

“Yonkers is pleased to once again lead the way as a progressive city in offering smart, emission-free transportation solutions for our community,” said Yonkers Mayor Spano. “Partnering with Bird will provide residents and visitors the opportunity to travel our city with ease and convenience all while being affordable, reliable and fun.”

“Yonkers’ dedication to micromobility is unparalleled, and Bird is honored to serve in the first e-scooter pilot program both here and in New York State,” said Rebecca Hahn, Chief Corporate Social Responsibility Officer, Bird. “Like so many New Yorkers, Yonkers residents are adopting more socially-distant transportation habits in the wake of COVID-19. We’re looking forward to providing a safe and sustainable way for them to stay mobile and support local businesses as the city continues to recover and rebuild.”

Through the Bird smartphone app, riders can see the closest Bird scooter on a map, unlock it, complete the safety tutorial and ride directly to their desired destination. Upon ending their trip, riders simply park the scooter safely along the side of a sidewalk or on-street next to an unmarked curb and take a photo of the scooter through the app to ensure proper parking.

The cost for a Bird ride is $1 to start and 30 cents per minute. Bird also offers low-income access plans that include unlimited 30-minute rides for $5 per month for anyone enrolled in or eligible for a state or federal assistance program.

In compliance with the recently enacted New York State law, e-scooters must be used on streets with a posted speed limit of no more than 30 mph. Riders may also use scooters in bike lanes, but must offer the right of way to bicycles. Riders must be 18 years of age to use a Bird scooter in Yonkers.

Yonkers’s partnership with Bird marks the second of its kind with a dockless transportation sharing company. The city was the first in the New York City area to embrace dockless bike sharing in 2018, and now will become the first in the state to welcome shared electric scooters nearly three years after the first Birds were launched in Santa Monica in September 2017.

The announcement comes less than a month after another notable micromobility first when the United Kingdom officially approved Bird One electric scooters for use in city trials, paving the way for Bird’s first UK launch since its scooters were first ridden in London’s Queen Elizabeth Olympic Park in 2018.

Click here to read Real Estate In-Depth‘s coverage of the “Back to Business” campaign. 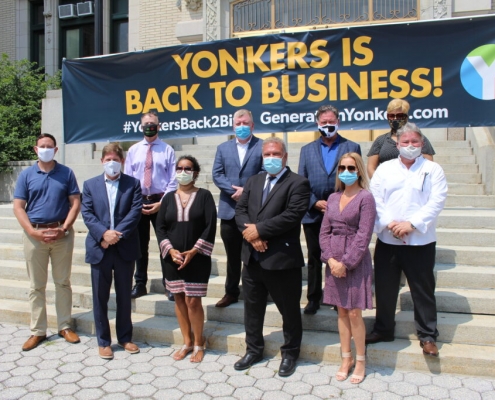 New Marketing Campaign Celebrates Yonkers Getting Back to Business

Click here for News 12’s coverage of the new “Back to Business” campaign.