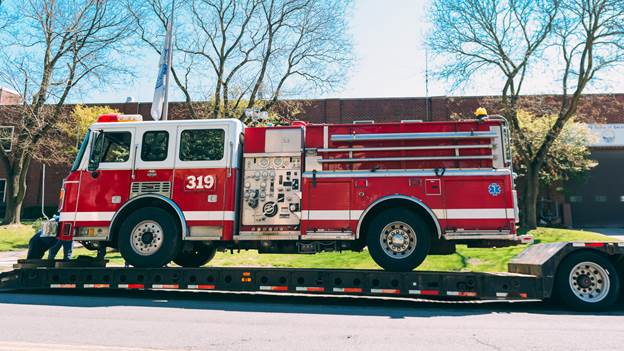 Yonkers, NY – April 23, 2019 – Yonkers Mayor Mike Spano today gathered with the Yonkers Fire Department, Yonkers Department of Public Works and the Yonkers Office of Veterans Services to official send off the City’s donated fire truck and equipment to Puerto Rico.  The municipality of Carolina, Puerto will receive the donations as part of its recovery efforts from the historic damage of Hurricane Maria.

The newly donated materials today departed for South Florida and will arrive via cargo ship to the northeast coast of Puerto Rico. The donations include a 2002 American LaFrance Freightliner truck, 60 sets of firefighting bunker gear, 60 flashlights, safety harnesses, and generators, among other various gear and equipment.

“This is truly a win/win for both us and Carolina, Puerto Rico,” said Mayor Spano.  “This is a fire truck that had to be replaced anyway because of our strict requirements here in the ‘City of Hills’ — but can still serve Puerto Rico effectively as a backup engine in their current department.”

Yonkers City Council voted in December 2018 to donate the fire truck and equipment to Carolina, a municipality of about 177,000 people that borders the capital of San Juan in eastern Puerto Rico.

Added Mayor Spano: “I’d like to thank our Office of Veterans Services, our Department of Public Works, our Yonkers Fire Department staff, as well as YFD Union leadership and our Corporation Counsel at City Hall.  There was a lot of red tape, hard work and patience involved to achieve this endeavor – but it was worth the wait!  I’m proud that the City of Yonkers is helping our neighbors in Puerto Rico, and that our City will always be represented in the Carolina community as they continue to rebuild from Hurricane Maria.”

The fire truck and equipment is due to arrive in Carolina, Puerto Rico in approximately thirty days.

YONKERS, NY – April 22, 2019 – Yonkers Mayor Mike Spano today announced that Smart Energy Decisions honored the City of Yonkers at its 2nd annual Innovation Awards in the category of “Government Onsite Renewable Energy.”  The installation of wind and solar technology at JFK Marina makes it one of the first parks in the region to be completely independent from the power grid through its use of renewable energy, according to the New York Power Authority.

The objective of Smart Energy Decisions’ Innovation Awards program is to recognize the efforts of large electric power users, their suppliers, and their utilities in support of the energy transformation currently taking place. Winners were chosen by an independent panel of judges, who rated each nomination based on objectives of the project, how the project was executed, innovation, and results of the project against the objective.

“It is an honor to receive this award from Smart Energy Decisions and be recognized nationally with so many other large corporations and institutions,” said Mayor Mike Spano.  “This Innovation Award is a testament to the hard work of the Mayor’s Office of Sustainability and departments of Public Works, Parks and Engineering.  I would especially like to thank New York Power Authority for all of their support and funding because this project would not have been possible without the 5 Cities Energy Program.”

“This innovative, renewable energy powered lighting project is the ideal embodiment of Earth Day and it underscores the impactful clean energy initiatives being carried out in New York State under Governor Cuomo,” said Gil C. Quiniones, NYPA president and CEO. “The project utilizes wind and solar power to ensure John F. Kennedy Marina in Yonkers is always well lit, improving safety, reducing greenhouse gas emissions and saving taxpayer dollars. The recognition from Smart Energy Decisions on this project is well deserved and we at NYPA look forward to building on our successful partnership with the City of Yonkers in the future.”

The JFK Marina Park Off-Grid Lighting project builds on the City’s previous replacement of 11,300 streetlights with energy-efficient LED lights. In addition to annual energy cost savings, tens of thousands of dollars in installation and maintenance costs have been achieved through avoided electrical infrastructure work associated with traditional lighting projects and through avoided repairs due to flooding. What started as a pilot program with one Off-Grid LED unit has grown into a fully self-sufficient, resilient and safe park for visitors and the surrounding community to enjoy – achieving its primary objective.

Added Mayor Spano: “This innovative wind and solar lighting project took a proactive approach to addressing and preventing costly lighting problems at JFK Marina resulting from storm flooding. The project has improved the park’s resiliency in the face of more frequent flooding events, eliminated energy costs for operation and has contributed to the City’s continued efforts to reduce its carbon footprint.”

JFK Marina is one of the largest and most popular waterfront parks in Westchester County and is particularly susceptible to storm flooding due to its location on the Hudson River.

“Throughout this spring and summer, we are taking direct action to restore the health and vibrancy of our neighborhoods,” saidMayor Spano. “Whether it’s beautifying a street, planting trees or encouraging greater recycling among our residents, we are continuing a partnership with our communities to improve our city and its image.”

This season’s Earth Month celebration is highlighted by the Old Croton Aqueduct Yonkers Clean-Up Day on Sunday, April 27. Residents are encouraged to join the City of Yonkers, Friends of the Old Croton Aqueduct and New York State Parks in beautifying the Yonkers section of the trail. Volunteers are encouraged to register by visiting www.YonkersNY.gov or by calling 914-377-6429.

Mayor Spano added, “The Old Croton Aqueduct is a beautiful historic State trail way running through our city that unfortunately has been a hotspot for littering. I am pleased we have gathered a strong group of community stakeholders who are willing to donate their time and resources for the sake of a cleaner, greener trail for all to enjoy. I invite our residents to join our efforts and volunteer that day.”

Additional spring/summer clean-ups and events in the City of Yonkers include:

The Yonkers Department of Public Works will provide resources needed during the cleanups, dispose of trash bags and, in some cases, provide trucks for pick-ups.

To ensure Yonkers remains clean following the clean-ups, Mayor Spano also is reminding residents to report any instances of illegal dumping to the City’s anti-dumping hotline by calling 914-377-DUMP. A reward of up to $1,000 is offered for anyone who reports a case of illegal dumping that leads to an arrest and conviction.

“If you see something, it pays to say something,” said Mayor Spano. “We must all take part and take pride in keeping our city clean.”