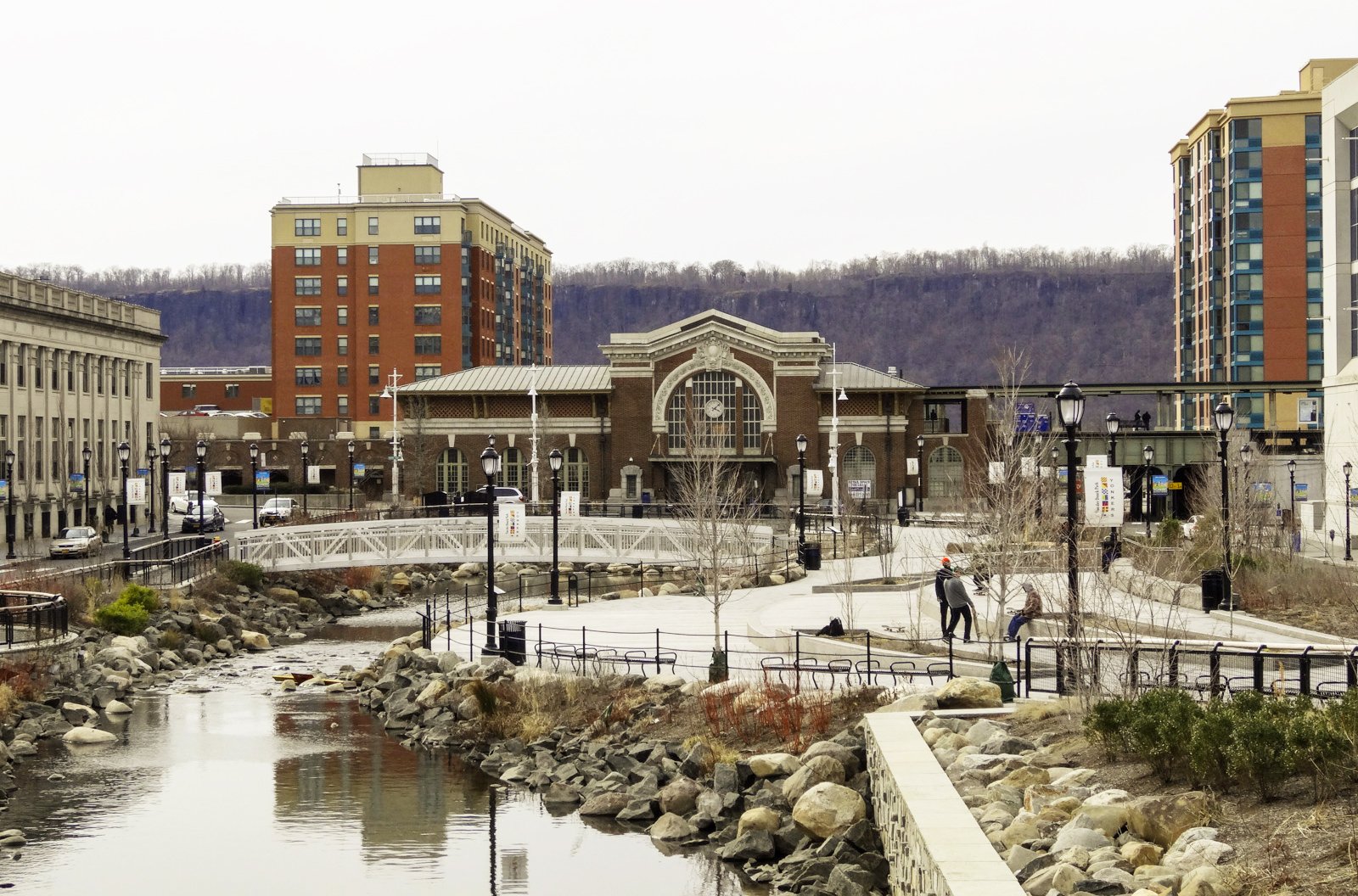 Located on the Hudson River adjacent to New York City’s northern border, Yonkers is the third-largest city in the state with nearly 200,000 residents. And with five major highways, two commuter train lines that are just a 28-minute trip to Grand Central, and the highest number of bus lines in Westchester County, it’s no surprise that many are going bonkers for Yonkers.

Phillip Gesue, chief officer of development at Strategic Capital, the developer of the Hudson Park residential project, told 6sqft that Yonkers is in transition. “Unlike Manhattan, which is, perhaps, over-baked, Yonkers is an affordable place to live and play,” Gesue said. “It has people who have been living here a long time and new transplants who largely want to work in New York City. There is a growing population, development momentum and job growth.” Ahead, find out how officials are working to attract millennials, get a breakdown of all Yonkers’ new developments, and learn why there’s a lot more to do here than you might think. 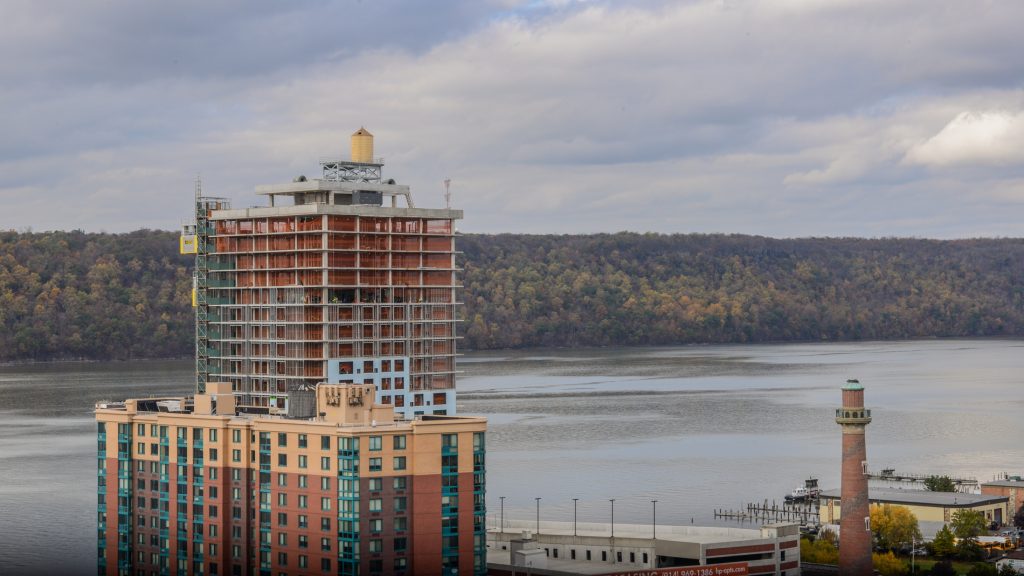 Yonkers has 4.5 miles of Hudson River waterfront. It has high- and low-rise housing, parks, marinas, fine restaurants and endless views of the Palisades. Westchester’s largest corporate park is in Yonkers, in addition to numerous retail and office locations. Yonkers also houses two major shopping malls, a central shopping corridor that runs the length of the town and the second largest casino and racetrack in the state. 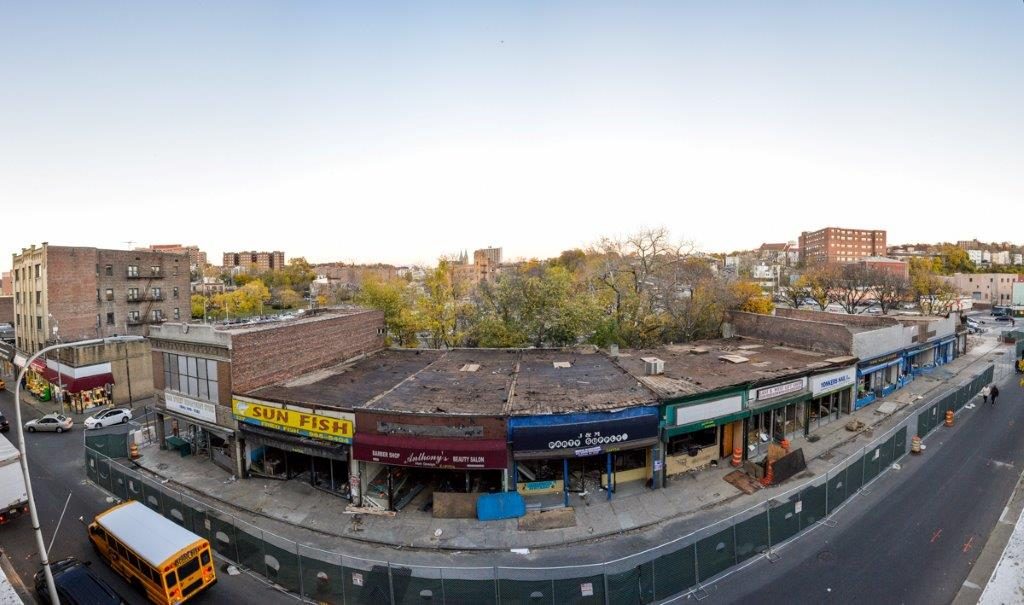 Photos courtesy of City of Yonkers

One of the most recent and exciting developments in the city is the massive “Daylighting” project. Daylighting is the practice of uncovering previously built-over rivers, a once common practice that many cities around the world and many cities are now reversing.

Cities developed around rivers for ease of transportation of people and commerce. As cities grow and need for space increases, rivers and streams get built over. Yonkers had many surface lots built over the Saw Mill River that was buried for nearly a century under downtown Yonkers. Now, thanks to a $19 million public works project nearing completion (it’s finishing phase three of a four-phase project), the Saw Mill River is now flowing through downtown with beautiful promenades alongside it.  Officials estimate the project will create 950 permanent jobs within five to 10 years.

And not only does uncovering this natural resource stimulates the economy, it also stimulates the creation of a natural habitat for migratory fish passage focusing on American eel, white perch, and herring that will then migrate into the open ponds. There is also an abundance of native vegetation that attracts insects and encourages food chains to sustain the aquatic life and, at the same time, maintains the water temperatures conducive to the life in the ponds.

There are a lot of happy residents, visitors and aquatic life in Yonkers. 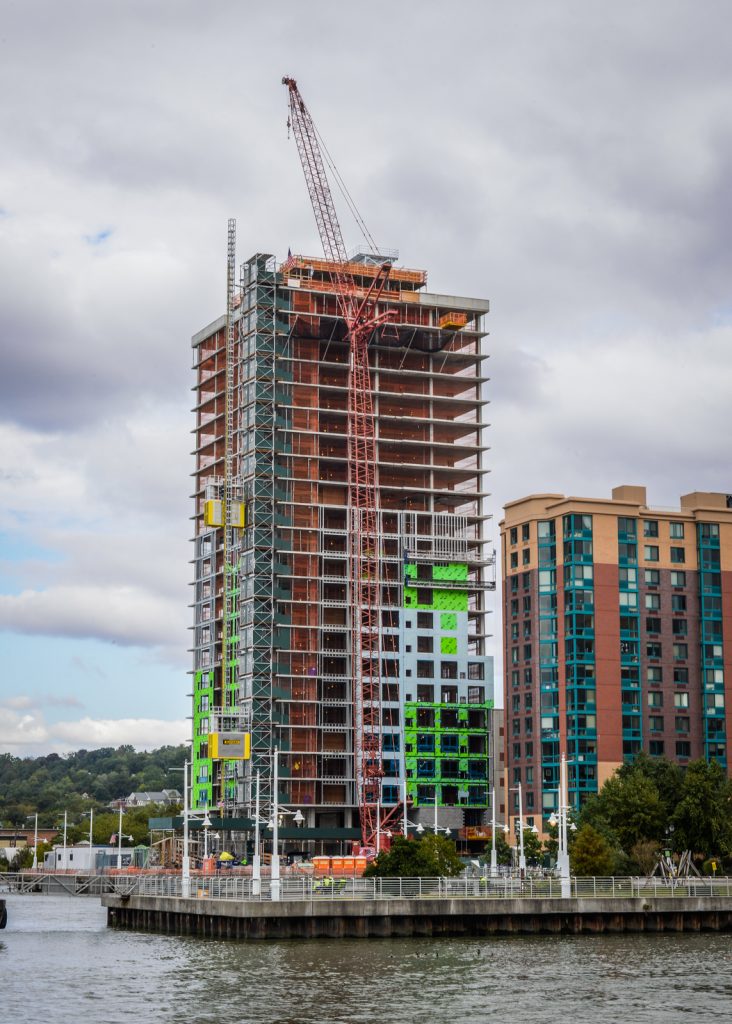 After recovering from the 2008 recession, there has been a flurry of building activity as Manhattan real estate heated up and Yonkers benefitted from people, mostly millennials and empty nesters, looking for better values. Many regional and national developers have also headed to Yonkers and are building luxury residences packed with amenities to make the 28-minute commute to Midtown seem inconsequential.

Wilson Kimball, the Commissioner of Planning and Economic Development, says Yonkers recent successes are all thanks to Mayor Mike Spano. In addition to his greenlighting the highly successful Generation Yonkers media campaign, his “concierge service” for development has been very well received.

Kimball says, “We don’t mind meeting with people on the front end to save on the back end. We will schedule for all the city officials to meet with developers, architects and engineers to streamline the process.” Kimball explains that rather than wait for issues to arise in the building process, city officials meet with the development teams, figure out what may be an issue and circumvent the problem by planning ahead.

Yonkers is actively targeting the millennial and empty nester populations from Manhattan and the surrounding area. Their dedicated efforts are paying off. 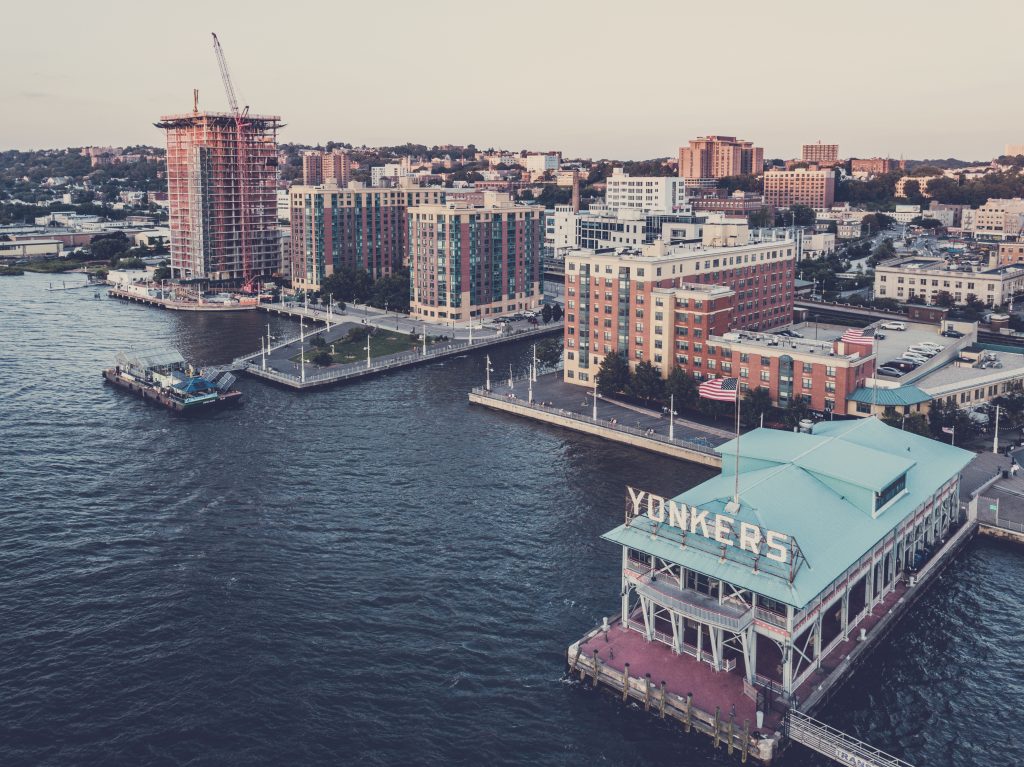 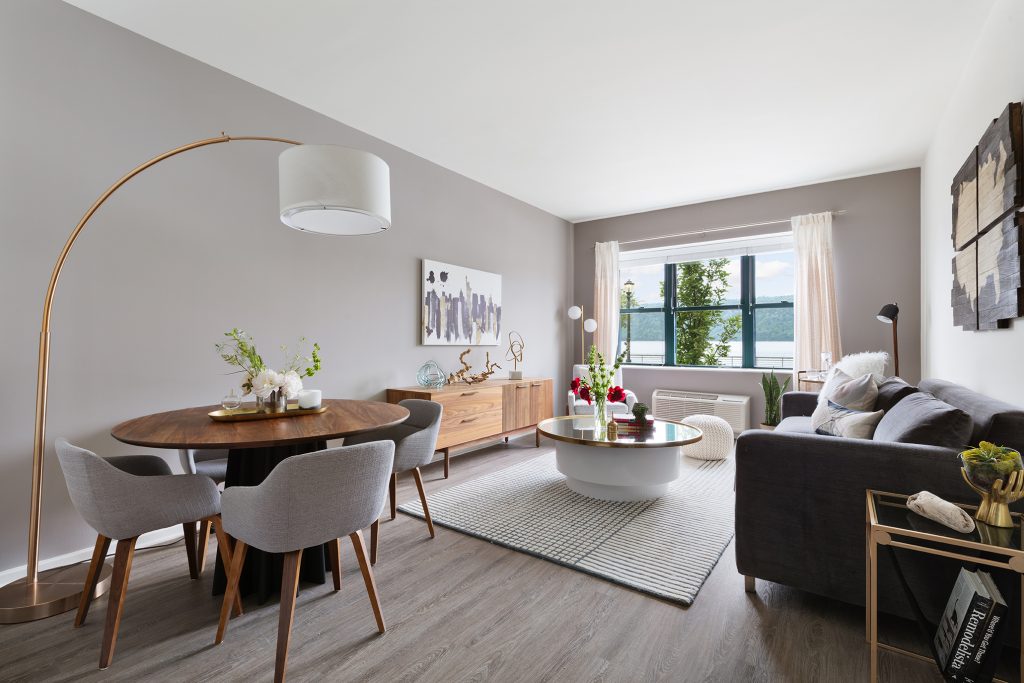 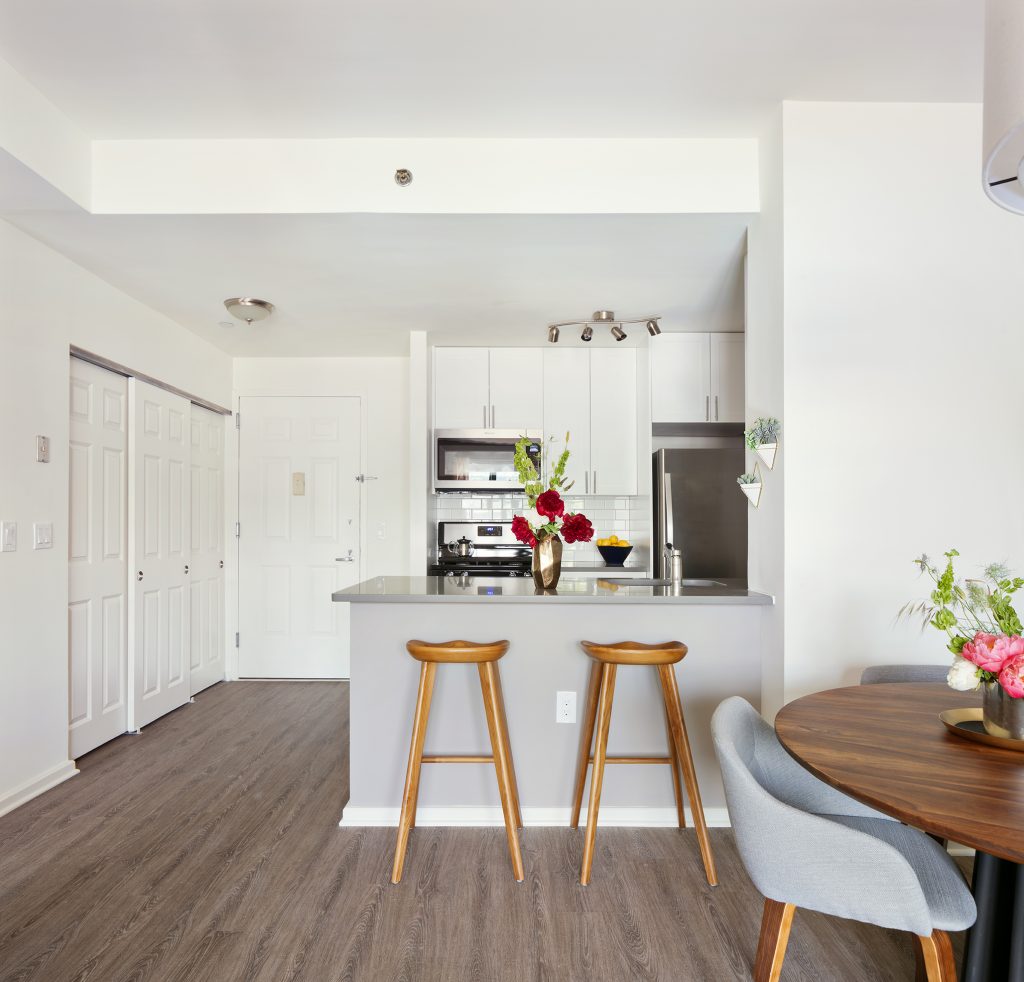 Hudson Park is a massive 16-acre development along the waterfront of Downtown Yonkers, which already has three existing buildings currently being updated and renovated by Strategic Capital, as well as a new fourth tower. Located in a resort-like setting, the apartments at Hudson Park boast spectacular views of New Jersey’s Palisades and the Hudson River.

The apartments include energy-efficient, stainless steel appliances, nine to 10-foot ceilings, wood-style flooring and tiled kitchen and bath, ensuite washer/dryer and walk-in closets and naturally lighted baths. Because of the scale of the development, there are a huge amount of amenities which include, multiple fitness centers, yoga and aerobics classrooms, an anaerobic workout room for spin, a conference facility, a co-working space, a resident lounge, a resident dining area, a rooftop lounge, an indoor lap pool with a 22-foot ceiling and floor-to-ceiling windows overlooking the Palisades, onsite retail, a concierge service, fully staffed buildings.

Located on the waterfront, there are tons of green spaces, waterfront walkways, fountains and pedestrian bridges right out the front door. According to Gesue, Hudson Park “is going to set a new standard of luxury for Yonkers.”

Larkin Plaza
Situated one block away from the Metro North, and directly across from the recently daylighted Saw Mill River, the RXR Realty four-building development includes a 25-story building, a 17-story building and two smaller two and three-story buildings. The Larkin Plaza development has a whopping 442 new residential units with 35,000 square feet of new restaurants and shops just a block from the City’s train station and fronting the newly-created Van Der Donck Park. Many of the apartments have views of the park, the Hudson River and the Palisades.

The buildings include a landscaped roof terrace with outdoor seating, an attended lobby and concierge services, a resident lounge with media center and billiards, a resident business center with Wi-Fi, on-site restaurants and retail along the park and on Main Street, and attached and covered attended parking garage with a private resident entrance.

Photos courtesy of City of Yonkers

Modera is a 24-story luxury apartment building offering studio to three bedrooms, with an average size of 950 square feet. Set on a 3.7-acre property, the building’s modern design and amenities integrate with the riverfront landscape. Modera Hudson Riverfront strives to balance relaxation and convenience. Building amenities include a clubroom, outdoor courtyard, sky lounge with a golf simulator, an outdoor pool.

66 Main boasts spacious studio to two bedrooms with state-of-the-art kitchens and floor-to-ceiling windows to take in the spectacular Hudson River, New Jersey Palisades, and Manhattan views. Apartments have features like hardwood floors, washers and dryers, and walk-in closets. The building amenities include a basketball court, a rooftop club room and outdoor terraces, a media room with a 60” plasma TV, 24-hour security and concierge and in-building covered garage parking. 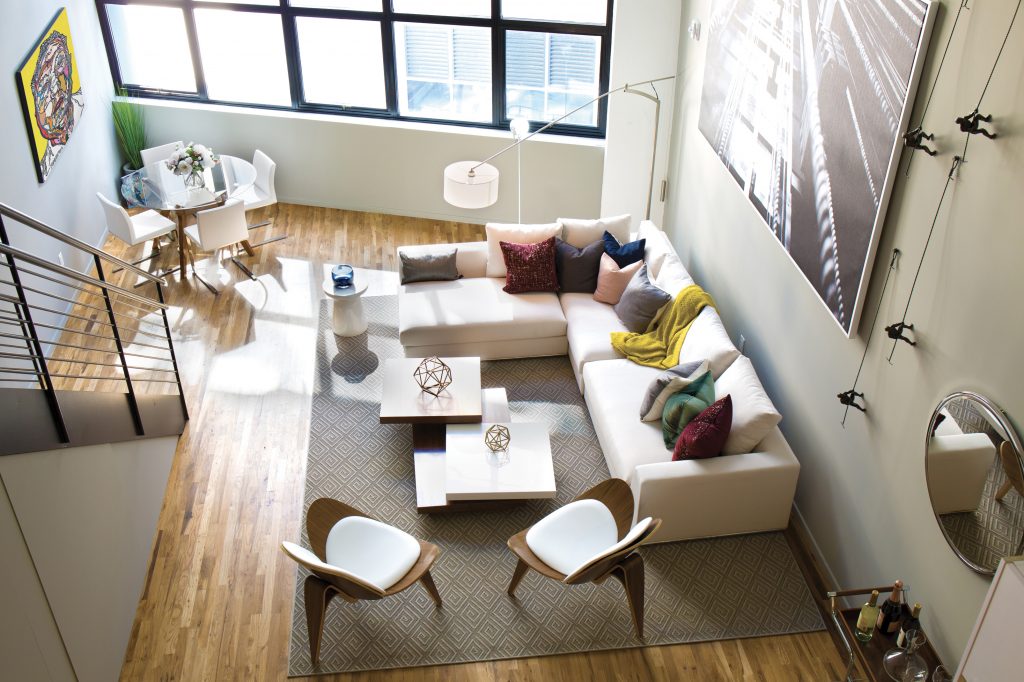 UNO is a conversion of the classic Otis Elevator Building into a combination of 50 Statesman Lofts and 50 Micro Flats. These Soho-esque industrial chic residences have 16-foot ceilings, oversized windows and cutting-edge apartment technology. Amenities include a rooftop deck, an outdoor patio, a community room and a co-working space. There is also free high-speed WiFi in every apartment, space-saving Murphy beds, a community room and bike storage. 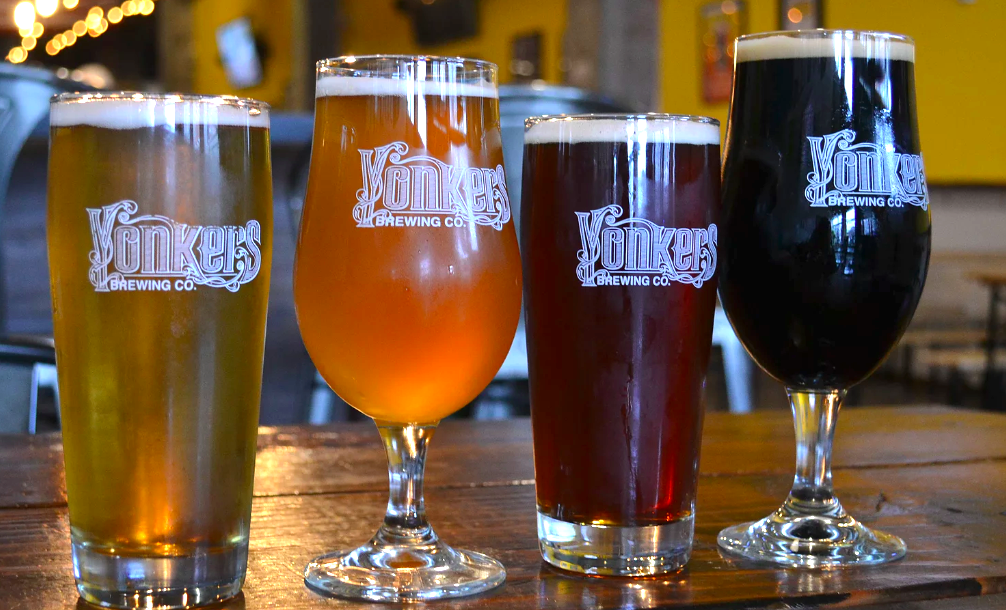 Yonkers Brewing Co. is the creation of two Yonkers’ natives John Rubbo and Nick Califano who really love beer. Located in downtown Yonkers, Rubbo and Califano wanted the brewery environment and culture to reflect how they see their hometown and be a place where the community can come together and enjoy a lively environment. 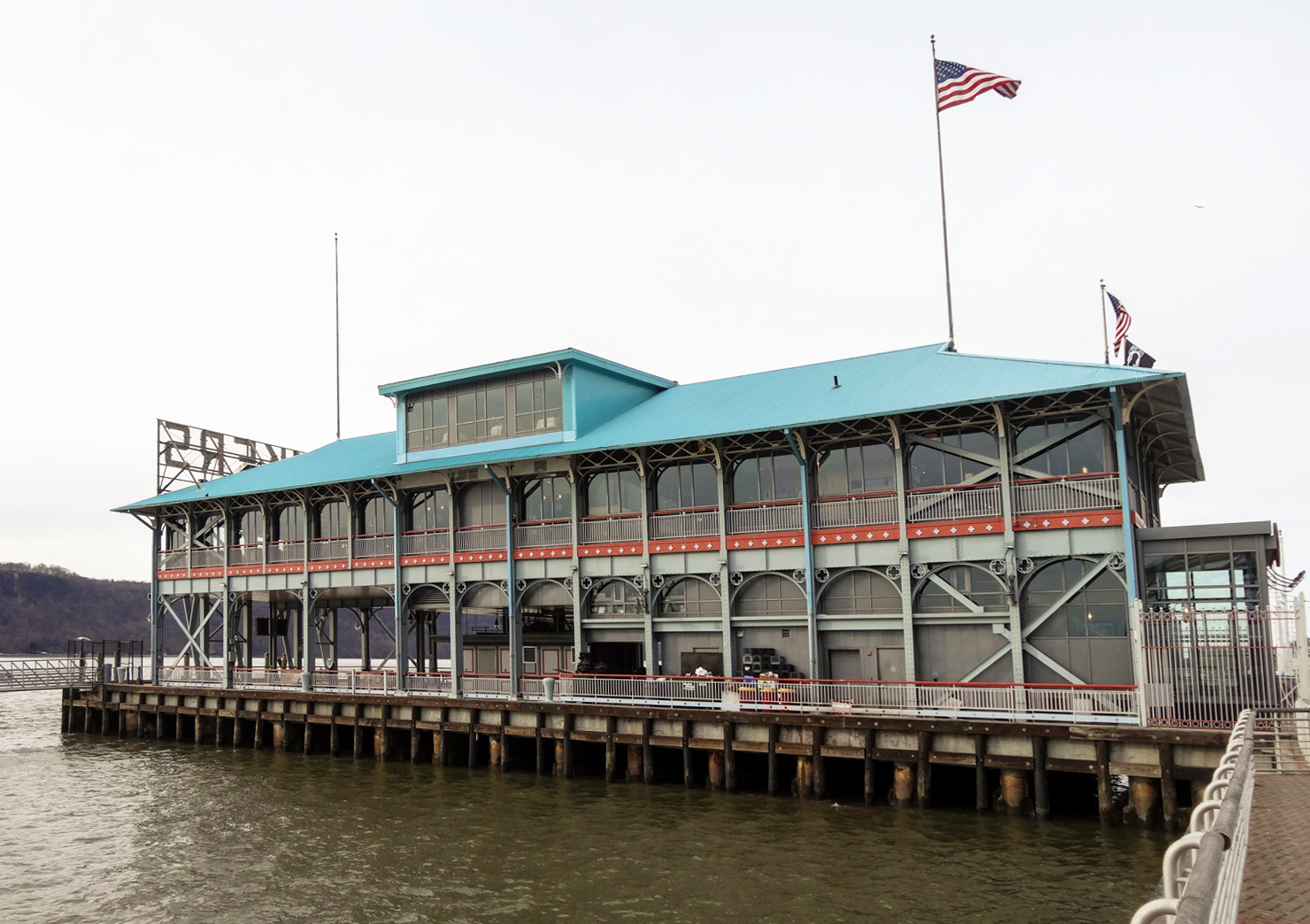 A stunning, glass-enclosed restaurant on a pier has globally influenced American fare with stunning Hudson river views. The menu at X20 offers a variety of surf and turf, like lobster, scallops and steak. A creation of restaurateur and chef Peter X. Kelly, whose Hudson Valley restaurants reign in suburbia, this restaurant really stands out for its location and architectural beauty as well as being super convenient to the commuter ferry dock. 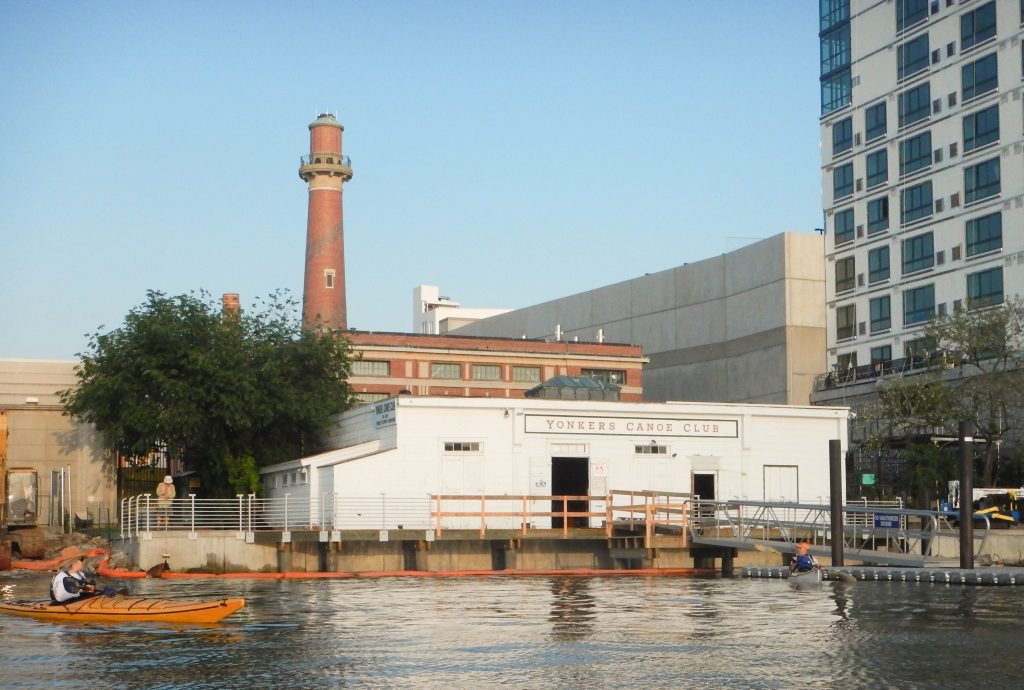 Photos courtesy of the Yonkers Paddling and Rowing Club

The Yonkers Paddling and Rowing Club, Inc. is a not-for-profit that rents equipment, leads tours, organizes event and educates. Their mission is to “encourage the growth of, and participation in, rowing and paddling sports.” In doing so, they educate and inform the public about the Hudson River’s present and future. 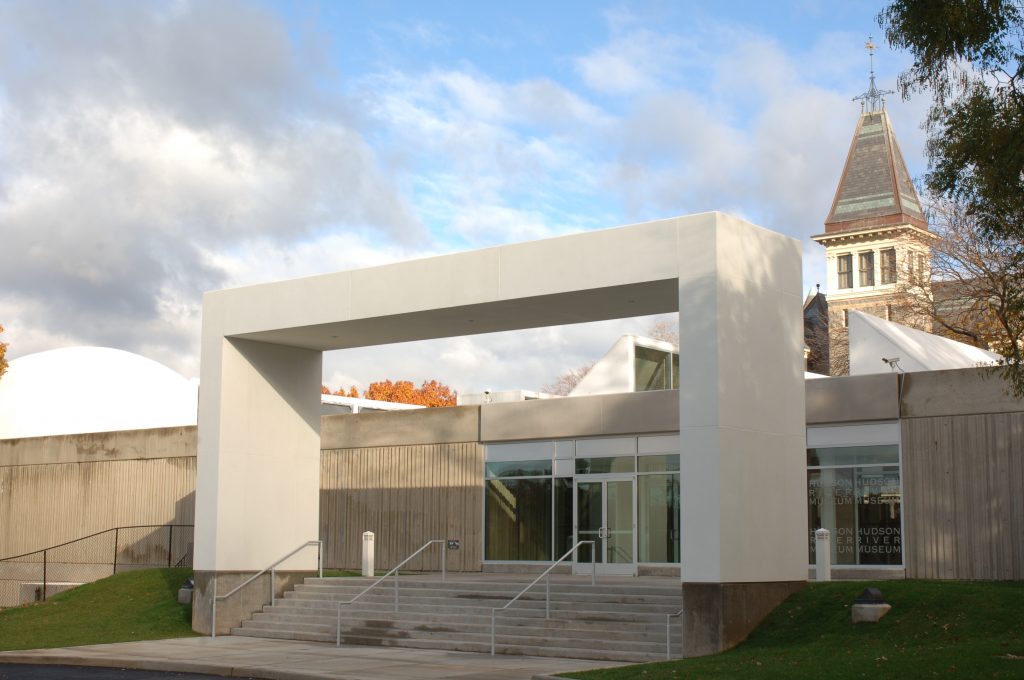 The Hudson River Museum is a multi-disciplinary cultural complex which also has a planetarium. The museum hosts exhibitions, teaching initiatives, research, collecting, preservation and conservation. Their goal is “to enhance people’s understanding of the art, history and science of our region. We support our communities and provide a museum window on the world at large. We serve our visitors well, so that they develop a sense of pride, allegiance and ownership— this is my Museum.” One current exhibit is “riverthatflowsbothways,” which is a four-channel video installation by artist Ellen Kozak and composer Scott D. Miller. Kozak and Miller’s unique collaboration blends three video channels with a single audio channel using non-synchronous loops that present viewers with ever-changing compositional combinations.

Billed as “Manhattan’s closest casino,” the Empire City Casino started as the Yonkers Raceway in 1899, originally called the Empire City Trotting Club. Seabiscuit was one of the many famous thoroughbreds that graced this track. In 1972, the Rooney Family acquired the Yonkers Raceway in 1972 and has maintained live harness racing for over 35 years. The casino boasts over 5,000 of the “hottest machines” available and the half-mile harness race track allows betting in person and online. Empire City Casino employs a significant number of women in executive and leadership roles throughout many departments on their 100-acre facility. And there are a ton of dining options will satisfy even the most discerning palate with Italian cuisine at Nonno’s Trattoria; Dan Rooney’s, a high-energy sports bar; Alley 810, a craft cocktail lounge with retro bowling lanes; and convenient delicious options at the International Food Court or Lil’ Cocina. 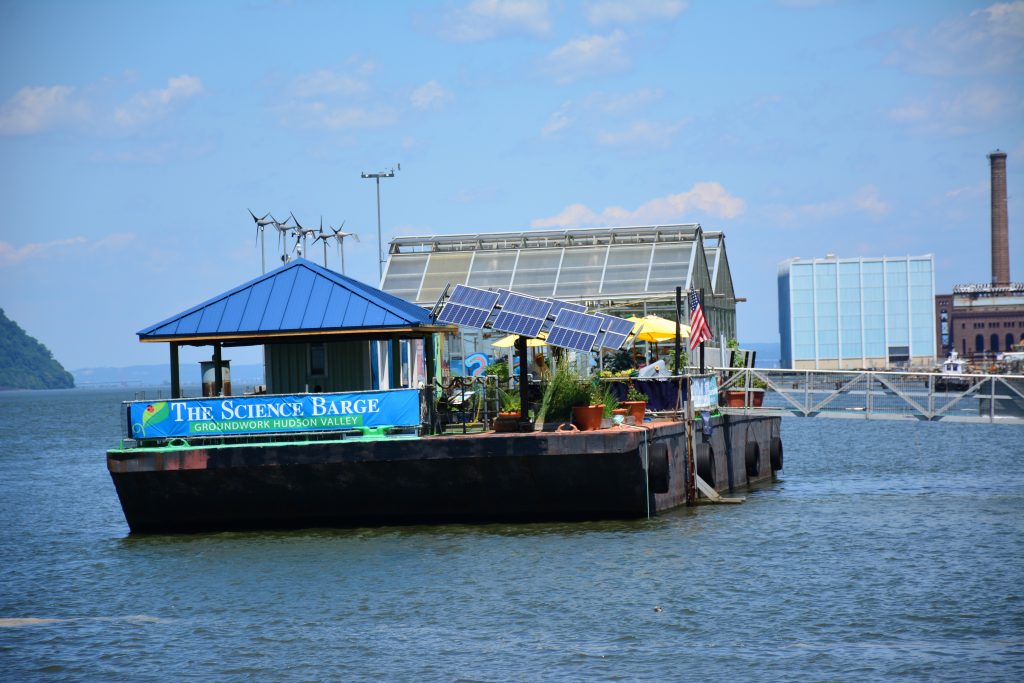 Docked in downtown Yonkers just north of the Yonkers Pier, the Science Barge is a prototype sustainable urban farm developed by NY Sun Works and acquired by Groundwork Hudson Valley. Winner of the Omega Institute’s Leadership in Sustainable Education Award in 2014, Groundwork uses its place-based approach to promote science, technology, engineering, and math skills, also known as STEM education. Through experiential classrooms, they make STEM concepts tangible and relevant to thousands of students each year.

The Science Barge is an off-the-grid education center/greenhouse, floating on the Hudson River. It grows fresh produce with zero net carbon emissions, zero pesticides, and zero runoff. All of the energy needed to power the Barge is generated by solar panels, wind turbines, and biofuels while the hydroponic greenhouse is irrigated solely by collected rainwater and purified river water, thus operating completely “off the grid.” It is the only fully functioning demonstration of renewable energy supporting sustainable food production in New York. 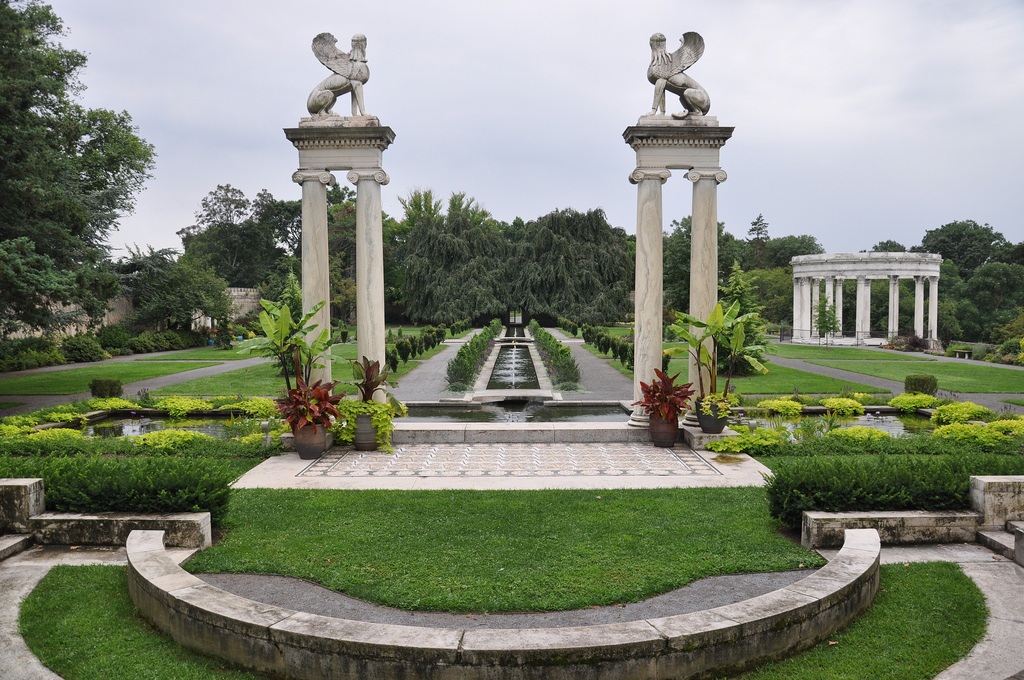 Yonkers is also home to the Untermyer Gardens, a 43-acre park considered to be one of the finest Persian gardens in the Western Hemisphere. Notable features include an amphitheater, a pavilion, the “Temple of Love,” and a “Vista” staircase. During its season that begins in April and ends at the end of October, the stunning garden offers events, including live dance, theatre and music events.